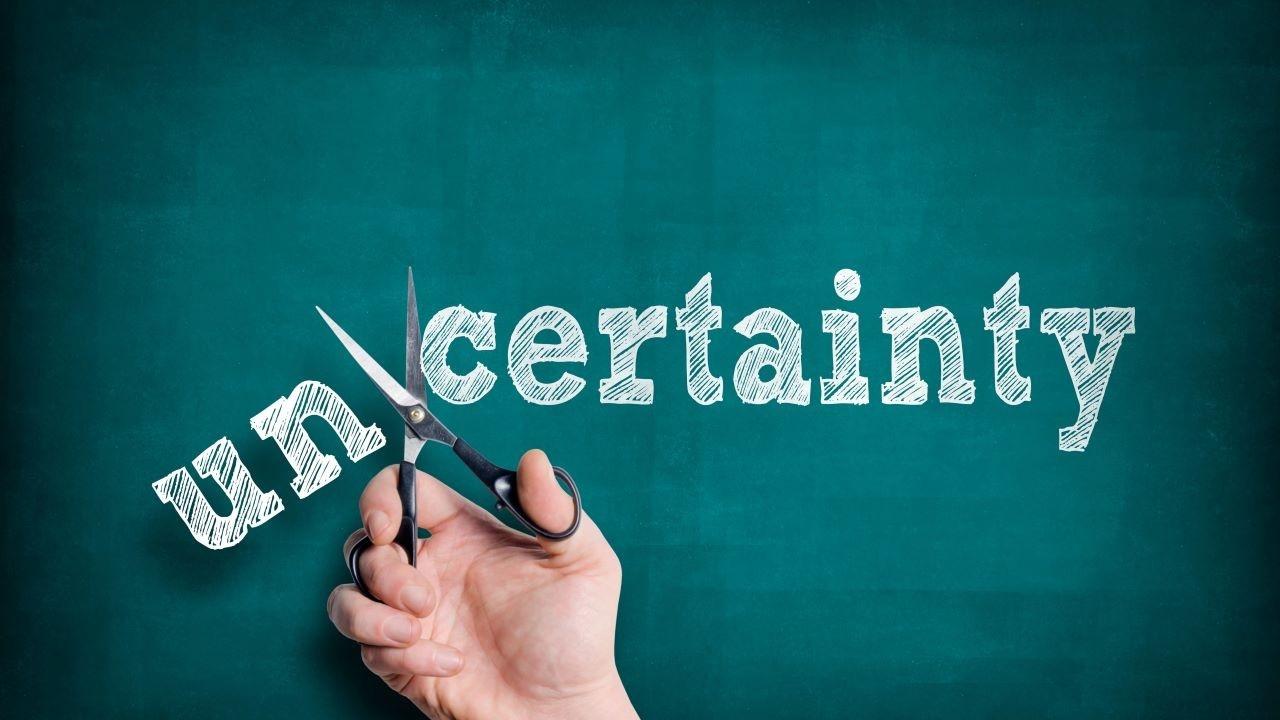 Regardless of what you’re trying to accomplish in life, one universal principle can help you succeed. I’m talking about the power of absolute certainty.

Moving from a state of uncertainty to a state of certainty is like magic. And whether you’ve recognized it or not, I’m sure you’ve felt it before.

You’re at the beach, standing at the edge of the surf, dipping your toe to see how cold the ocean feels. You came here to swim, get some exercise, and let your kids play around in the ocean.

But now you feel sleepy, not much like exercising. And the ocean feels colder than you expected. Then something catches your eye.

It’s a flash of color floating 30 yards out in the waves. You realize it’s the back of your son’s swimsuit. He’s face down, bobbing aimlessly in the waves. He appears to be unconscious.

Your decisions become instant. Your body moves without hesitation.

No obstacle can hold you back. The adrenaline of certainty pulses through your veins. There is only one thing to do. You act.

A moment later, you emerge with your son in your arms. He coughs and regains consciousness.

How cold does the water feel now? You have no idea, and you could care less.

Certainty moves us from contemplation to action. It has the power to unleash sudden torrents of energy toward a goal regardless of what obstacles may loom in our path.

In the world of entrepreneurship, certainty is doubly important for productivity. It clears away ambiguity, procrastination, and days spent working without much to show for it.

For business leaders, there will always be unknowns. But good state management requires clarity about what is in your control so you have absolute certainty about what to do next.

Certainty is about more than just a clear goal to direct your action. It’s also about energy. And that’s because certainty dispels all doubt that holds you in a state of limbo.

It’s a state of mind that allows you to unleash more of your energy toward the achievement of a clear mission. Would you like to improve your ability to tap into that source of power at will?

I’d like to share a few micro strategies for tapping into the power of certainty. There are far more potent strategies I practice with the entrepreneurs in my Certainty Accelerator Group, but the following five methods have the advantage of simplicity and quick results.

Think of them as circuits in your brain that you can activate to get a jolt of increased motivation through the power of certainty.

Let’s break down each of these techniques, starting with a trick for handling the small transitions in your typical day.

When transitioning from one activity to the next, pause just long enough to set a clear intention for the next task you’re about to tackle. Ask yourself what kind of mindset you want to bring to whatever it is you’re going to do next.

Instead of rushing from one task to the next, close your eyes for a minute and get certain about the outcome you want, even if it’s something simple like rapidly processing a batch of emails or heading into a meeting with your team.

This simple act of setting your intention grants you power. It prevents you from being reactive, and it reawakens the power of certainty repeatedly throughout your day.

Many people approach their work like a marathon. It’s a never ending, exhausting race without any finish line in sight.

But there’s a problem with this approach. You subconsciously limit yourself in order to conserve energy for the miles ahead. Without even realizing it, you sabotage the speed at which you can work.

The solution? Create a shorter sprint. You might recognize this concept as “chunking” where you break down a big goal into bite-size chunks. Here’s how it helps to activate your sense of certainty.

You identify a very specific chunk of work. You determine in advance to take a short break to recover after its completion. This allows you to be more certain about how long you have to work until you get a break. Knowing a break is coming allows you to stop subconsciously limiting the energy you bring to your task.

Entire books have been written about this one simple concept. Whatever goal you’re working on, take five minutes to remind yourself why it matters to you.

Motivation ebbs and flows depending on what’s at the surface of your thoughts. Getting very clear about why you want something helps to unleash instant energy. Unlike caffeine or other stimulants, you don’t pay a price for it later. It’s free energy available to you if you can just remember to use it at the start of each day.

In practice, it means asking yourself why you want something, and then continuing to ask “why” until you get down to the root motivation that is very real for you.

Ask “why” until you get in touch with something raw and powerful. It’s a simple way to increase the feeling of certainty that will pave the way for disciplined action.

Humans have competing desires. For example, I want certainty and predictability in my life. But I also want adventure and growth.

Which of these competing drives will dictate my behavior? The need that has recently been most neglected. Because that’s the need I feel most strongly.

If you haven’t taken a vacation in two years, the childlike part of you that just wants to play and have some fun can begin to sabotage your efforts at self-control.

The solution? Certainty. In this case, that certainty is gained by acknowledging each of your competing desires, and making a plan to address them.

This is why I encourage entrepreneurs to start the day by not only planning work tasks but at least one activity planned for after work as well. It needs to be something you intrinsically enjoy, and you must write down what time you will stop working so you can go enjoy it.

Essentially, this is a leadership skill. In this case, you’re not leading a team with divergent views and desires, trying to align them around a central goal. Rather, it’s a matter of internal leadership. Gather together your competing desires and align them with a single plan of action.

There’s a secret to getting more of what you want in life. Those who get what they want determine in advance that they are willing to pay the price to achieve their goals.

Here’s what that means. There are going to be some sacrifices you don’t enjoy. And you make a decision to be okay with those sacrifices.

As a result, you no longer waiver at the brink of action. Instead, you confidently dive in. And you suffer less because you’re not feeling sorry for yourself. You’ve set your mind and decided this is a price you are glad to pay in order to get what you want.

For example, when I wake at 5 AM to an alarm that reminds me to exercise, I don’t lay in bed questioning whether this is worth it. I’ve already decided to accept those five uncomfortable minutes of moving from groggy to fully alert and driving to the gym.

Before you go after a big goal, acknowledge the price you’ll have to pay. Accept that discomfort. Embrace it. Choose it. And remind yourself why you are willing to pay that price.

The fastest way to accelerate your progress is to shift your mind into a state of absolute certainty. Do that, and progress will begin to feel automatic and effortless.

Take action now. Lock in the power of certainty by joining The Certainty Accelerator today. It’s a state-management training and accountability group for entrepreneurs who recognize their own mindset as the key to peak productivity.

Follow this link now to read more about The Certainty Accelerator and apply to join your peers as we practice the art of productivity from the inside-out.